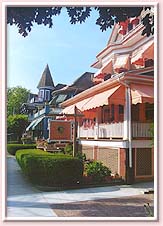 Indulge yourself with gentle ocean breezes and the sights and sounds of historic Jackson Street.

Saltwood House is ideally situated on Jackson Street - the heart of Cape May’s primary historic district. Possessing one of the town’s finest streetscapes, Jackson Street has a warm and festive atmosphere all seasons of the year. The historically consistent Victorian architecture, the gas lamps, the profusion of colorful flowers, the large sycamore shade trees, and the passing horse-drawn carriages all work their individual magic to give the street it’s distinctive flavor.
Jackson Street

Jackson Street is the oldest street in Cape May. Laid out in 1783, it was originally called Cape Island Road, running from the Delaware Bay to “the Atlantic”, Cape Island’s first hotel. The road was used to transport visitors from steamboat wharfs on the bay to the oceanfront accommodations of the hotel. Nothing remains from 1783 because of a major fire in 1878 that not only destroyed everything on Jackson Street but everything in the original downtown area. Within a few short years, the street was completely rebuilt and not in the Federalist style that was destroyed but in the wonderful Victorian architecture that the town has become famous for.

Nestled mid-block on this delightful street, the Saltwood House is only one-half block from the beach and is equally close to the Washington Street Mall, the town’s main shopping district. Many of Cape May’s finest restaurants are also within easy walking distance.